CAKFG battle of the creeks….

To say I was excited by the prospect of a local tournament on the creeks…which included Yellow Creek….in the afternoon, in late August would be an understatement. 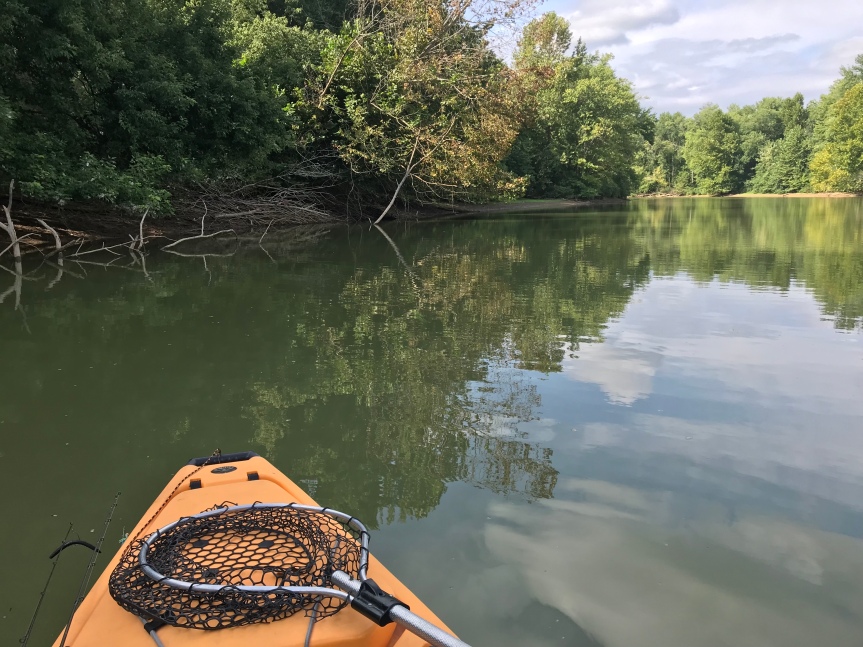 The tourney was slated to run from 4 to 10 p.m. on any one of the local creeks between here  (Clarksville) and Dover, Tennessee.  These creeks, these are the places that I grew up fishing; where I did well in two previous National Championships, where I have caught double digit numbers of bass over 6 lbs, where I slay crappie in the winter and white bass in the spring, where I caught my first pickerel and bowfin, where I first launched in a kayak just over three years ago…the place I go to regroup, to find myself…to get “quiet” for a minute.

This same setting is also where I fished my first kayak tournament with the CAKFG group three years ago….the same tournament where I picked up my first tournament skunk.  I have had my truck broken into twice on Yellow Creek, shot bottle rockets off the bridge into the water, passed out….and in my distant past, grew plants that may one day be legal in our state on the banks far up the creek.  So to say that I love the area would be an even bigger understatement than saying I was excited about the tournament.

But during pre-fishing, I only found a couple of fish in Guices Creek and lost a decent one in Yellow so I was a bit worried.  I also knew I would never be alone in the creek, and that Yellow is pretty sensitive to large numbers of anglers.  But in the end, I chose it because it is truly the place that defined me as an angler.

I pulled up to the launch to find Matt Duckworth and Matt Lake on the ramp, saw Donald Guthrie’s truck – knew he was there (later learned that Kareem Thompson was with him too); assumed that Josh Stewart would be showing up and that James Davis would fish there after dropping off a paddle for Matt Lake.  So six anglers and myself….plus two boats with two anglers each up the creek…..I almost went to Guices; but decided to risk it.

I started up the creek, knowing I was not going much past the first flats and hoping that everyone would pass me and head to the back.  They did, so I fished very slowly until 5:30 giving the water time to “calm” after all of the traffic as I moved into the back of the creek.  I caught three 10-11 inch fish with a fluke along the way…and was a little worried.

Then the shadows dropped across the creek, the temp cooled a bit…and I pulled out the Heddon Zara Spook Jr.

I worked it very hard, trying to draw the fish up…Bam….an 11 inch spot blew up on it.  Good sign.

I moved back in the creek and could hear voices, but saw no one….knowing I was in the best section of the creek…and turned back toward the mouth…

…working the bait very hard over shadows under the water….and you know the sound if you have ever caught a bass over 6lbs on a Spook….and my first thoughts…

Lesson….push the pedals forward to pull the drive up!!!  YOU KNOW BETTER!

…I held my rod under and away from the boat….but it found the drive….and took my Baby Bass Spook with her.

Hate to admit it, but I almost broke my net on the hatch of my Hobie slamming it down…

I dug out another spook – I had no more baby bass – had zero confidence in it.  I had tried to find some at Academy…but some of you had bought them all!  “I am going to skunk in this tourney again!!” 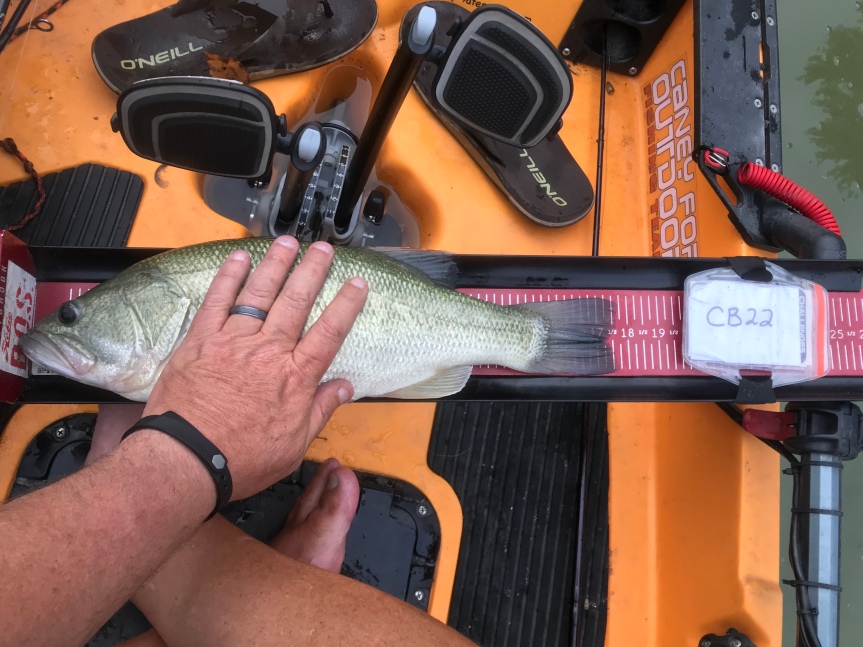 It took me straight into wood and I pedaled as fast as I could to see that it was gone.  I had seen it and knew it was 17 plus…dang it!

Lesson two…I forgot to mention that my line breaking earlier may have been due in part to the fact that I was working this spook (crashing it hard) with 8 lb test I had used at Lanier…the lesson…8 lb ain’t quite enough for hammerin’ a spook over wood. 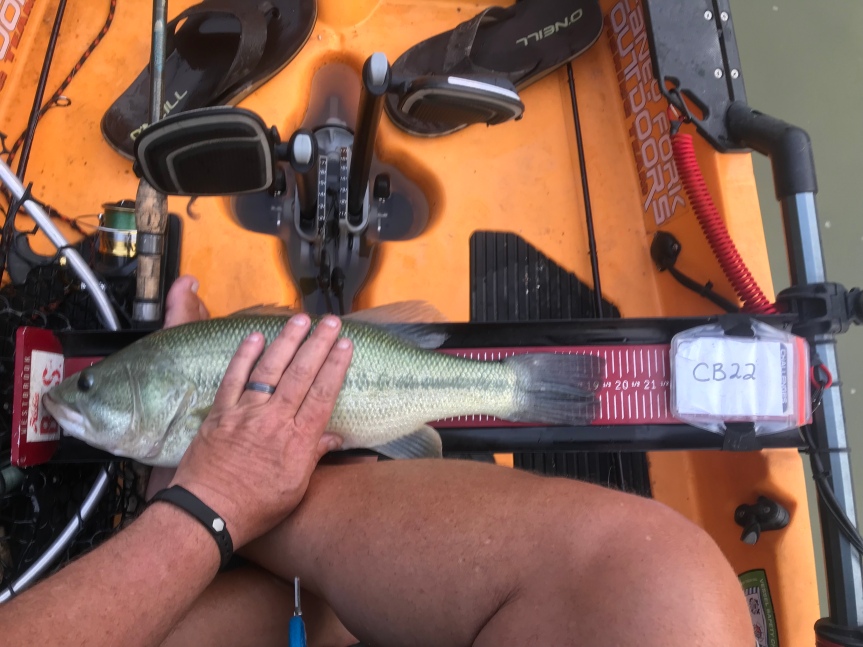 Anyway….less than fifty yards away was a spot I knew usually held fish….CRASH…19 plus….YES!!…one more… 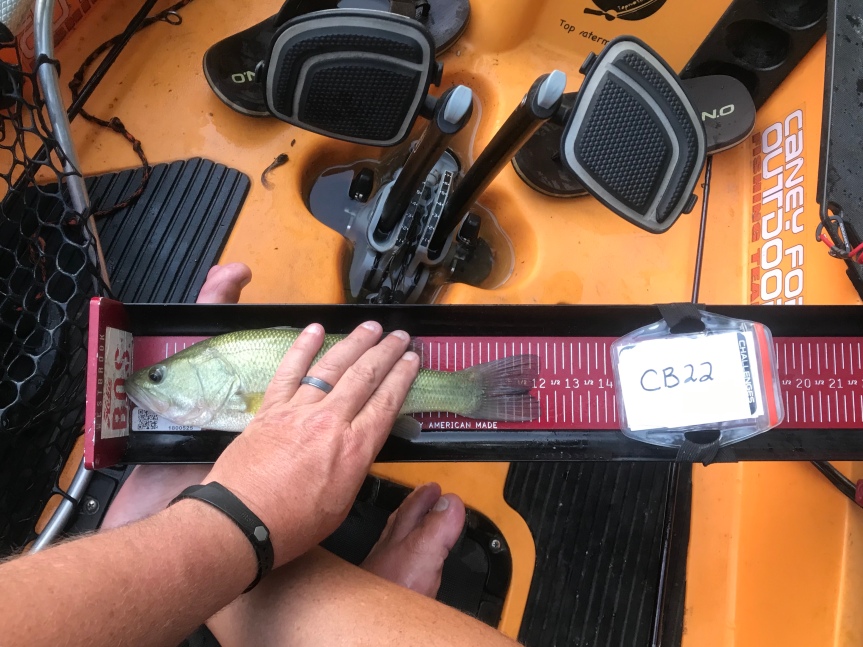 I did something I never do…I looked to see where I was in the standings…it was almost seven, I knew the creek bite was going to die…so I looked.  I was leading.

James had come up beside me, we had talked about measuring fish at the FLW event, so we spent some time measuring the 12 to show how I do it…and then I told him how I had been catching them and we slowly worked back to the ramp.

I upgraded the 12 to a 12.5….and pulled off the water at dark – I do not fish in the dark…..then I parked at the check in till everyone was there.

The check ins I must confess are my favorite part of every tournament.  You get to see old friends, make new friends…laugh at, with and about everyone there….and just enjoy the camaraderie that comes with our community.

And these guys (you CAKFG folks – old and new) are the most special to me.  They are the first kayakers I met, the first I really knew…and to be honest, the most supportive bunch I have ever been a part of….love you guys!!!  Thanks Greg Phipps for introducing me to them….so much.

All in all, it was a good day.

#titanup
#titanup
Taking some of the Hobie fleet from Caney Fork Outdoors - River Store to the Marina Wednesday afternoon for a demo ride.
Well, here we go. Day two.
This is why.
Me at work hoping I don’t come in too late for the Hobie BOS signup for Eufala.!!!!
Loading Comments...
%d bloggers like this: