The question keeps coming up since I moved to the Hobie PA14 – is it better than the PA12?

Comparing an awesome kayak to its big brother doesn’t seem fair, there is no loser with either of the kayaks. But for those who have asked, I am going to give my view – or why I would choose the 14 over the 12. 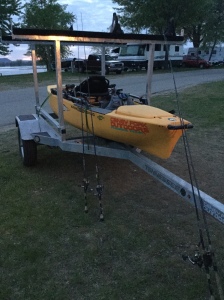 Now, I am not going to compare them by drive differences; I did not have the 180 Mirage Drive on my PA12 – and never saw the need for it. I carry the Bending Branches Angler Pro Carbon Paddle, so there was never an issue turning or backing out of tight spots; so in my head, the drive was overrated. My head was completely wrong….upgrade! The first time I was out, I didn’t use it at all. The second trip, I found myself under a tree and thought “let’s give it a try”; it was freaking awesome.

The benefits of the Mirage Drive design allowed me to move backwards with the same speed as moving forward. As I tested it more, I found I could “feather” backwards too. The steering is not quite as responsive in reverse, but it still functions well; and I will always carry my Bending Branches paddle for the tighter spots and to help with quicker turns in forward and reverse.

The PA12 is stable – more stable than other boats I have tested. I thought the Jackson Big Tuna was pretty solid, but when I switched to the Hobie, I found that I could stand with ease.

The PA14, with the extra width allows me to almost walk around on the deck. I am not a skinny guy, so I was a bit leery in the smaller Hobie; that is gone now. I have actually stood and made casts while drifting with the wind.

Maybe the drive plays a part, but the 14 seems much faster with less effort. I could out run other pedal yaks in the PA12 (not the Torqeedo guys), but the PA14 makes it easier to maintain the faster pace with less effort. Now I know why I couldn’t outrun Jay Wallen to a spot on Kentucky Lake!

It is very counterintuitive (big word of the day) to me that the PA14 handles better than the PA12; but it does. It like thinking that my Nissan Titan will turn in the same space as my Joy’s old Sentra…then finding that it can (not true of the truck/car scenario by the way).

I fished in a small creek for my first adventure and was surprised by the turning ability of the larger PA. I spent the day thinking of the hull differences, the draft; the physics of it all. Not really…fish were biting, but I have thought about it since. 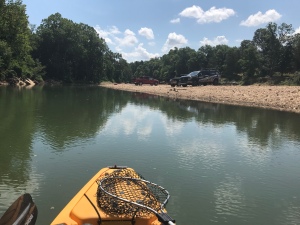 I fish shallow when given the opportunity.   Often too shallow for the Mirage Drive (another reason I carry a full paddle), so I was afraid I would lose some of that ability with the larger boat. Not true. I have found that the Hobies will go as shallow as most kayaks on the market, and I cannot tell a real difference between the two. I will say that the PA 14 seems to track better when paddling; and doesn’t seem to require more effort than the 12.

I did have some trouble fitting the PA14 on the bunks of the Tennessee Trailer. It took me a few tries to find the correct spacing to keep it in place as I rounded corners, or backed down ramps (see post about broken Bending Branches Angler Pro Carbon – still crying about it- paddle; new one on the way). But now it stays solidly in place; the kayak rides well on their trailer.

The PA12 is easier to manhandle and fits in the bed of a Titan much easier without a bed extender. I hope I never have to carry either kayak, I will pick Joy’s Compass if I am going walkabout with a kayak under my arm; the 14 loses this battle. But since I have a trailer (and the length actually makes it easier to load on a truck rack)…and since I am too old to wrestle a kayak anyway…the PA14!

The deck is simply more comfortable on the PA14. I really didn’t think the slight difference in width would matter, but it just feels less crowded. For a guy that carries 7-8 rods and drops them beside me to grab another after a bass short strikes a topwater bait, it is great! Maybe when I perform that “drop and cast” signature awesomely awesome move…I will not have to spend the next twenty minutes fishing for a rod…not that I have done that four times this year or anything.

Although I couldn’t possibly carry more stuff on the 14 than I did on my 12 (cause I don’t own anything I didn’t already carry!), there is room under the front hatch and on the back deck to allow it…maybe one more tackle bag full of spinner baits? Hmmm…??

So…those are the reasons I would pick the Hobie PA14 over the PA12. Again, there is absolutely nothing wrong with the PA12, I loved my BoHobien Rhapsody and all of the adventures we shared. I am keeping it because I still love the boat – and want to share with family and those just wondering what it is like to be in one of the best kayaks on the market. I was just fortunate enough tournament fishing this year to be able to upgrade.

And since you asked, thought I would share what I see as benefits to me.

Life is good. Grandkids back at our house.
Not our normal seats...but at the Titan’s playoff game!!!
Once in a while, you get surprised!
Congrats to y’all who found ‘em! I am shocked to end up 44 out of 148...made me feel a bit better about not getting a bite until after noon...didn’t want to look where I landed....then 44th with three little fish...wow...out of 148...dang.
What do you do when you can’t leave work and have some @cellarbaits on your desk? Dream a bit about heading to Chickamauga in the morning....and not pay as much attention to the meetings as you probably should.
Last month I forgot I even signed up for The Dugout Tri-State Series - didn’t even submit a fish dang it. . Then this shows up! More than I have won on some tourneys where I fished for days!!! Thanks @dugoutbaitandtackle.
Loading Comments...
Comment
×
%d bloggers like this: