I headed to Guntersville Alabama with the intention of camping somewhere, winning the tournament, then going to Nickajack to catch some fish I knew would be in a difficult place to get back from….three simple goals; I accomplished none of them.  We will get back to the camping in a minute – but when you plan to camp…CAMP!!!

First, I pre-fished on Friday and found fish with about everything I tossed.  I was ripping and running along the area I had chosen, stopping every hundred or so yards pulling fish.  Yamamoto Senkos, frogs, Rapala SkitterPop, white spinnerbait, swimbait…it didn’t seem to matter, they were biting.  The wind was pushing on the banks, and the fish were there.  I could see bass beds, blue gill beds…shad…I could see me crushing it on Saturday.

I loaded up and moved when the gusts reached in the 20mph range to a place I thought would be a bit more isolated with Kris Hummel.  We both caught a single bass.  When we were loading he told me that he was staying with Billy Reynolds, Steve Leaman, and Ryan Marshall; they had extra room….back to that in a minute…but, when you plan to camp….CAMP!!! 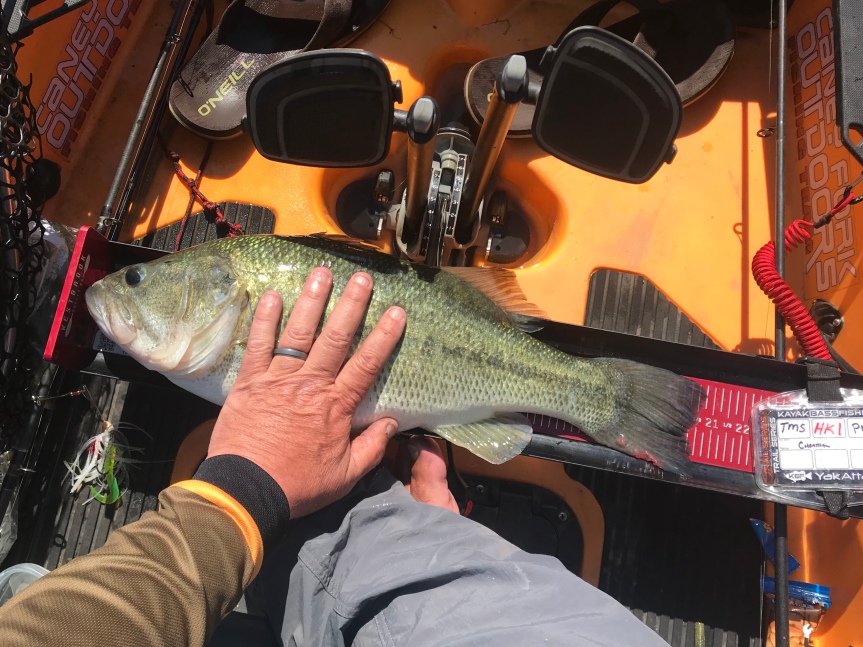 The day of the tournament, well, I did catch a 20.75 on my favorite spinnerbait.  And I could see the fish….and they did hit a senko, and a spinner bait…and well, I only caught three keepers and a bunch of short fish. I finished in (stammering non-committal sound here) place; goal number two = failed.

Skip to Nickajack on the way home.

Fished some spots, then launched just below the Chickamauga Dam and pedaled across to a small creek. Years ago, it was the spot I first caught a small mouth.  It was also where I caught what I described to folks I worked with as a “catfish with feet” (now I know it was a waterdog or mudpuppy) 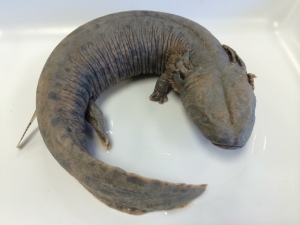 …the same folks I told I had seen a western made with only little people…so my credibility was very low….but look it up “Terror in Tiny Town”…so no one believed me at all…I did do a lot of drugs way back then….so I still understand…but look it up!

I fished and caught a lot of small fish; smallmouth, bass, a few spots…a monster bluegill…and then headed back toward the ramp.  I knew the water had changed directions in the creek (it was flowing upstream), so it was a bit of an issue.  I took off toward the ramp and steadily headed toward downtown Chattanooga.  Not by choice, but by the currents demand.  I pedaled with all I had, losing ground as folks on the bank watched and pointed…then I finally hit a break in the current and was able to pedal the half mile back up to the ramp.  Loaded up and headed back to Clarksville…hugged my Joy thankful to be home!…took a nap – because I hadn’t slept (when you plan to camp…CAMP!!!).

So back to the inevitable eventuality that is from now and for eternity known as “WHY YOU SHOULD CAMP WHEN YOU PLAN TO CAMP!!”.  Also known as failure number 1!

SOOOOOOOO….Kris Hummel got me a room at the inn with Billy, Steve and Ryan.  I had never met Ryan, so I had no expectations of him.  The other knuckleheads, well, we have crossed paths many times on the trails.  Billy and I had talked at three or four in the morning my first KBF Open will waiting to see how much I had won, Steve and I had talked a lot…we all shared a friendship with Rebecca – so I thought how bad could it be….

I love to learn new things. I absolutely love it.  Once I went back to college in my late twenties and thirties, I discovered that I would love to go forever.  But what I learned in the first twenty….no, five minutes, about this crew…no therapy, no drugs, no shock treatments…no lobotomy can erase.

I write on this blog a lot and try very hard to keep it clean – so I cannot replay most of the first day at the Honey Hole in Alabama.

I cannot talk about the boat ramp bet that was lost by Ryan.

I cannot replay the conversation at dinner (a meal that kept me in and out of the kayak all the next day, sick!!!) when the waitress came up to Ryan and asked if he was on youtube, if he was famous…for doing things at the boat ramp!  Billy had set him up. 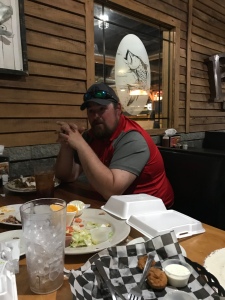 I slept huddled in a ball on a small section of sofa missing my Joy softly whimpering.  She had gone to a wedding in Chicago, I had ended up here….with this crew….I will never go to a tournament without her again.  If I do, I will camp, or sleep on the interstate…or just not sleep…

Day two with them…

I tried to find a way to not go back…just go camp..I was sick, I was tired, I was scared of what might happen….what else I might learn…and it kept coming!

I still have no idea how Steve can sleep through the alarm on his phone, how Billy paid off the fishing bet, how Hummel slept with Ryan snoring or why I will never be allowed to join the fat kid fishing team…..

I do know that I will never be the same and I will never go to a tournament without Joy!!!  And when the only room at the inn is in the stables….I ain’t sleeping with those animals again!! 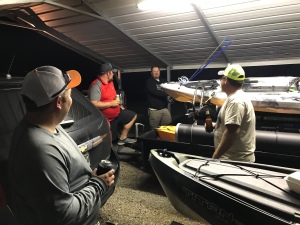 So it wasn’t really that bad and am kidding, and I wish I was willing to say more about the weekend, but I will refrain and leave it at this EXTREMELY watered down version of events.

I had a freaking blast with them.  The reality is that they welcomed me in, I got to know more about them and their families. We joked, we laughed, we picked on me for being the only one in the group to not catch a limit…well, they picked on me.  We helped each other get ready for the day of fishing, we helped to get Hummel’s car running, we traded lures, line and lies.  It was not my best performance on the water, but it was definitely still a great tournament hanging out with them.

We share a connection with KBF, with fishing and being on the water.  Our memories of Rebecca, of the tournaments we have all attended together filled the night as we talked until we were totally exhausted, then slept. 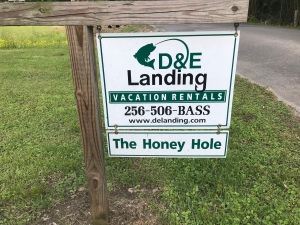 I will have fond memories of Guntersville because of the two nights at the Honey Hole….thanks y’all.

I know y’all expected me to write about it all…….ha…..half the fun was you expecting the worst.  Peace.