For the second time in my kayak tournament career, my body aches. It is not due to the high winds like I fought at the Stick Marsh in Florida (the first sore day), but because of the strong current of the New River around Galax in Virginia.

To be honest, it was not just the strong current – I selected a beautiful boat ramp (according to Google), but when I pulled up on what should have been a large lot at 5 in the morning, I slid across three to four inches of mud! I could see the posts that marked parking, so, I knew it was the right place…but I hoped it was not. As I walked down the ramp in rubber boots I had brought (only because I thought the water might be cold), I found myself feeling the concrete ramp under about 6 inches of life sucking mud (Should have taken a pic!!!). 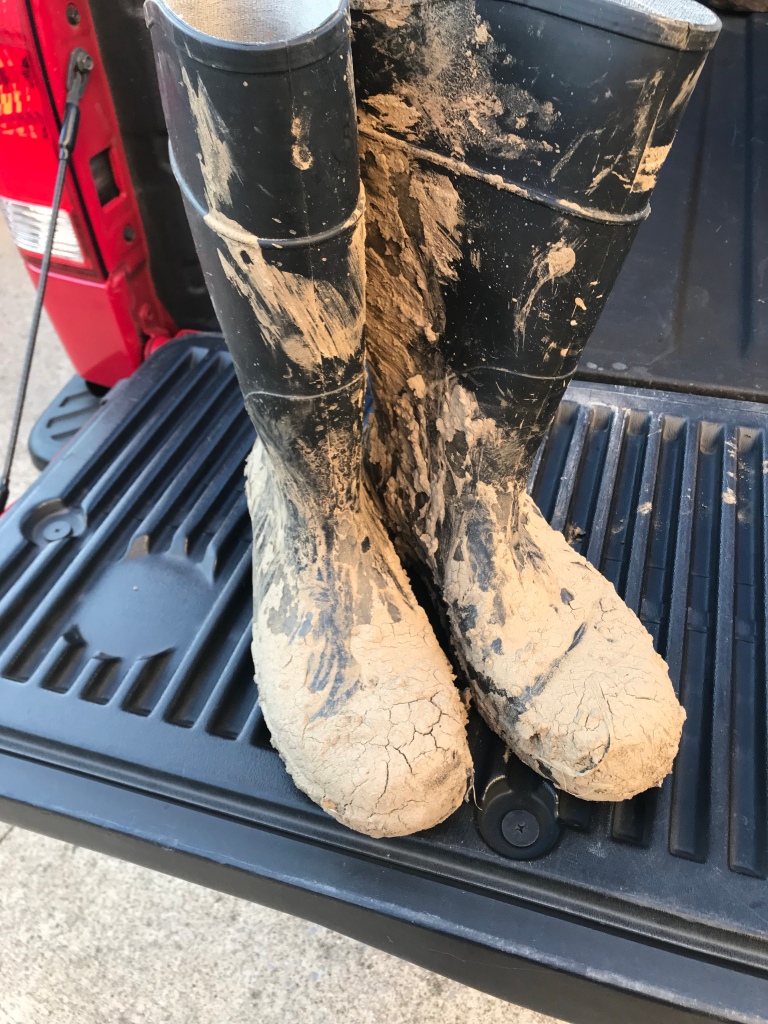 There was a tent set up, and I could see three kayaks outside the tent, so I waited to watch them launch hoping there was some super-secret magic spot that I could not find in the dark; if not, I was going to have to pull my Hobie PA14 down about 15 yards of mud….then later back out.

I met Brian Butcher, Jason Turley and Joshua Jordan as they emerged from the tent and pulled their Hobie 14s toward the same ramp I was hoping was not real. They confirmed my worst fears….this was the way.

I watched them pull their kayaks (with the Hobie carts) through the muck. I backed my trailer down the ramp as far as I dared, then pulled my kayak off and dragged it through the mud…no cart for me; it was not too bad.

Be back to this ramp in a few minutes (hours in tourney time)….

I could see the current. I had looked at flow charts about the river –

– so I knew a number…but only when I started pedaling against the current did I learn what that number meant; it meant hard pedaling to go anywhere.

I headed up river casting top water, a spinner bait, spoon and a square bill; searching the rock bluff and flats. Nothing.

Then I pulled up to a creek running into the river, Brush Creek, and tossed a Gary Yamamoto Craw in blue with black flake on a Brewer Slider weight on my St Croix Mojo Bass rod. Tap, fish….cast, tap, fish….cast, tap fish…catching four at the mouth of the small creek. They were all small, but measured. I crept in a few feet….tap, fish five.

I have learned that I truly love the action with the Brewer weights paired with the Yamamoto Craw. It flutters a bit, but also darts when the rod is twitched. This action seems to be quite effective in smaller waters.

I moved back out of the creek and pedaled about ten feet upstream, tossed the combination behind a small rock outcropping; tap, tap….I set the hook on a 17 inch largemouth. I also lost a fifteen inch largemouth as he spit the lure back into the kayak on the same rock. I was not long into the morning and was culling; always a good thing.

During my research, I had seen a bridge just over two miles from the launch. A hundred yards or so past it, rapids. There spots were my target for the day, so I took off.

Now, this part is why I think it is very important to go out to some water where you can see the charted flow, and decide how that feels. I can tell you I was not armed with that knowledge or experience (see recommendation 1 above), so I saw the bridge looooonnnng before I could reach it pedaling my Hobie with all I had in me.

I finally reached the bridge and beached my kayak to breathe!

If I slipped into the eddy current the piers created, I could fish them and knew I would find something there. But, these spots were narrow and the water was flowing rapidly around the piers, making it difficult to keep the Hobie out of the flow until I used my Bending Branches paddle to control the kayak…keeping it headed into the eddy, then using it to push off the piers when I was pulled too close.

Recommendation 2….If you fish shallow water…carry a full paddle, even if you “Hobie”. The Hobie is the best kayak on the market (argue with someone else, I ain’t listening), but I take it in less than the 6-12 inches required to pedal the Mirage Drive often and find that it is a pretty easy boat to paddle – especially with the lighter paddles now offered by Bending Branches (I use the Carbon Angler Pro).

Anyway…it paid off with a 16 inch smallmouth.

Then I headed to the rapids only to find them too “rapid” to effectively fish, so I paddled/pedaled back to the bridge until I was just too tired to fight the flow any longer and headed back toward the ramp; again, using the paddle in areas where the current took control.

Skip ahead to about a half mile below the boat ramp.

I had not found a single fish on any lure but the Slider/Craw combination (caught over 15 fish), so I tossed it on a slanted rock sitting in about 15 foot of water. A small tap, I set the hook on my largest of the day a 17 and three-quarter inch small mouth.

Now, back to the ramp.

Recommendation 3….talk to the other kayakers out on the water. You will find that this community is probably the best bunch of anglers out there. They share fishing techniques…they share lures, patterns, knowledge…water – to fish or to drink…maybe not always their best spots (there is a line)…but I LOVE the kayak bass fishing community. After winning the Erie Open, Dave Lefabre talked to the KBF anglers about what a good group we are – friendly, giving…and he is right. They are pretty awesome; part of the attraction of competing with them to me.

The ramp…seems like I am avoiding that as much as I did after the tournament.

I pulled my kayak into the mud while watching two of my new friends pulling their kayak up the (life sucking) mud ramp; and it stuck.

I pulled it, it moved 12 inches. I took two breaths.

I looked up to see Brian walking to the other side of my kayak.

We pulled it to the top of the ramp, and set it behind my trailer.

Out of breath, I followed him down the ramp; we pulled the other two kayaks up the ramp as a team…a group of friends allowing me into their circle as we helped each other in a race to load their kayaks; they still had to submit their fish. Like I said….I love this community.

We talked about the day, our Tennessee Trailers (Brian had one too), the mud…where we were from as we loaded their kayaks and took down their tent.

Then they said “follow us, we know the way”.

This morning I woke up back in Tennessee, tried to stand up to head to Nissan Stadium…and found that the mud had taken its toll…but after a strong Titans showing…some of the life is coming back….ok, really I am beat, sore for the second time…but smiling about the adventure.

Well…almost ended in last place in the CAKFG tourney Saturday! It is never good when you only get one fish accepted email on @tourneyx … but when you only catch one that is what happens. Did get a pair of @epocheyewear glasses at check in! So there was that….
Love being part of the Hobie team representing Caney Fork!
Decent day on Kentucky Lake. Take 4th any day!
Life is good. Grandkids back at our house.
Not our normal seats...but at the Titan’s playoff game!!!
Once in a while, you get surprised!
Loading Comments...
%d bloggers like this: