I am going to share the technique(s) I used during the National Championship; or more accurately, the discussion I had with several folks after exposing the lure I used.

Now before this goes on, there are hundreds of ways to do anything….this is just about what worked for me in the location I was in, under the conditions of those two days. Disclaimer over.

I am predominately a Barkley guy, it is where I cut my bass fishing teeth; but I know that Kentucky can produce some large bass this time of year. I tried 6 locations on Barkley and three on Kentucky Lake. I quickly narrowed down my choices. I caught fish at all but my favorite spot on Barkley with the same lure; a lure that had won me our local club opener on Kentucky Lake.

A week earlier I would have gone after that spot on Kentucky Lake (over 90 inches and quit two hours early) knowing it would be overpopulated with kayaks for the Championship. But, the water dropped 10-12 ft and it would take an Uber to deliver me far enough on the shore to reach the bushes where the fish had been stacked. So, I punted.

Now I know my favorite spot had the potential to win, someone almost did from there, but I had not even felt a bluegill tick any lure I put in the water. The quality of bass at all but one other was not what I felt would give me a chance.

So, after stopping at the place I learned to fish top water for the third time and catching another 20+ inch fish, I chose.

The one consistent thing in all of those trips and the club opener was the lure choice that was producing. It was a Mann’s Classic spinnerbait with a willow leaf/colorado combination that had pulled in the largest bass and gave me the most confidence. I was not quite slow rolling it, but I kept it barely visible from the surface; and saw the flash of the bass as they took it.

The Mann’s classic has a very thin wire which leaves it susceptible to damage, but also maximizes the vibration I feel through the rod. I had replaced the skirt with a fairly clear version with just traces of red. And as I always do (and always will do) I had a chartreuse grub as the trailer. 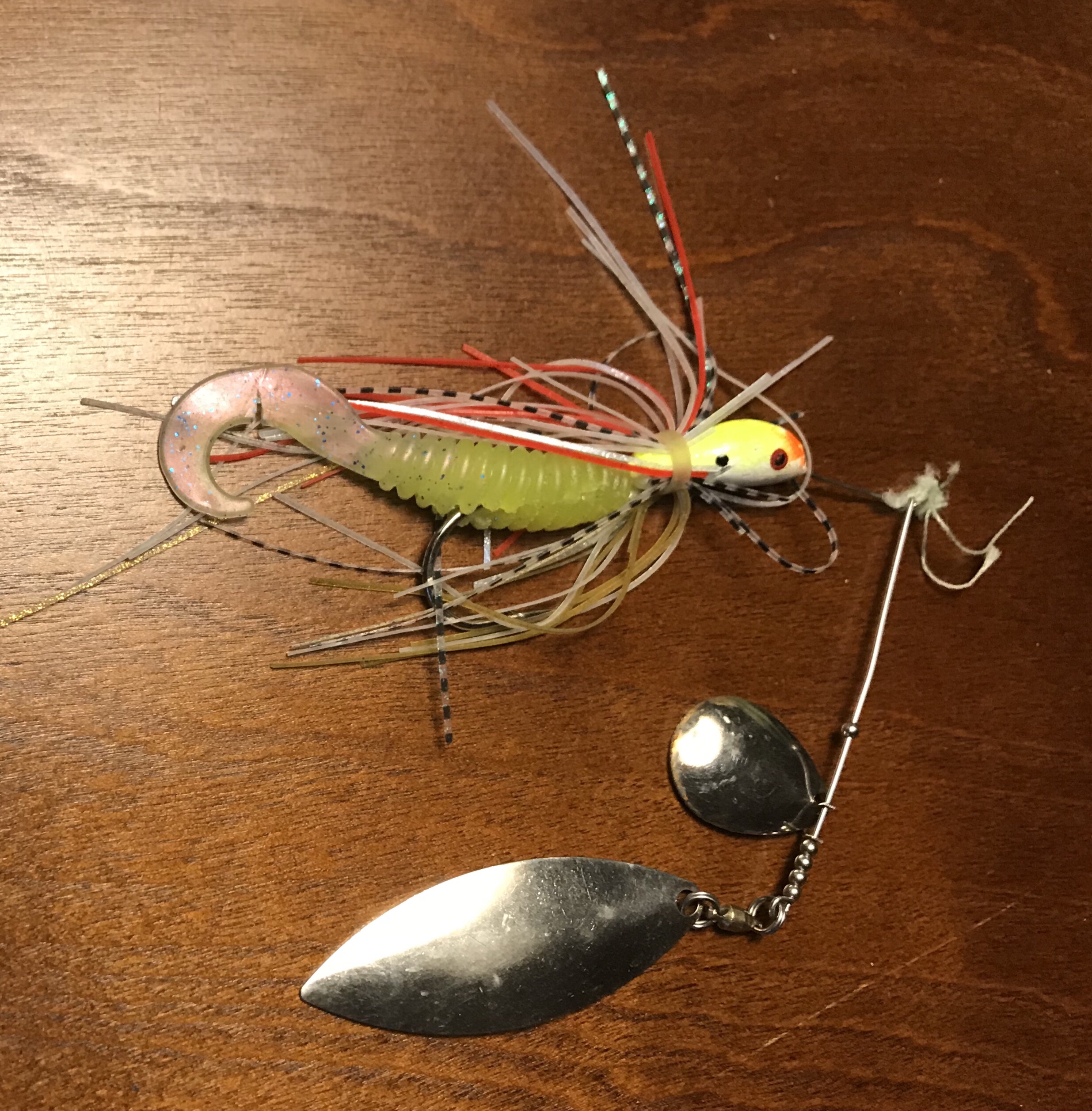 The lure used for the CAKFG opener and the KBF National Championship.

Gonna put that down there for a second – ‘cause that grub (with the tail rigged up, ALWAYS UP) provoked some serious discussion I want to recap.

I flew to the ramp early to beat any traffic. Got there first – all good.

Ben Lowery and his son Evan showed up soon after – still all good.

Then an RV showed up pulling an Armada of kayaks! Dang it! I kept looking over my shoulder with my hands on the Hobie…knowing I could not block the ramp with good conscience…but….but….

Then they drove off leaving a guy from Chicago – all good, as soon as my heart calmed down.

Once we launched, I moved the long distance to my spot.

My fish had shown up, my spinner bait vibrated ticking rocks and sticks until the heavy thump of a largemouth pulling it in (grub tail up!) to feed.

All in 86.25 inches by early morning but the bite turned off.

I had to ride that length to 7th after day one, only catching small fish until lines out.

I flew to the ramp early to beat any traffic. Got there first – all good.

Ben Lowery and his son Evan showed up soon after – still all good.

A van showed up from Georgia – Will Clements.

I kept looking over my shoulder with my hands on the Hobie…knowing I could not block the ramp with good conscience…but….but….

Then we talked. Will was headed far from my spot…should have followed, he landed in fourth overall!

Moved a couple of times before going back there; I knew my spot reloaded. I had discovered that during the week. It was never the same time.

Around 11, with way less than enough fish to win on the board, I told Ben I could catch some 800 dollar fish toward the main channel. I was down to chasing dinks to stay above the 75th place line!

I put down the Mann’s bait, and put on a shaky head tipped with a 3.5 five inch pumpkin w/black flake Gary Yamamoto craw. Anyone of you who knows me, already having abandoned top water days before the tourney (killed me), can relate to the pain and suffering it caused me to sit still and shake that crawfish. I have caught some big fish on that bait, but my goal was survival!

Shake, shake, shake….tap…pretty sure the craw won the fight….for the next two…

Shake, shake, shake….tap…12 inches. Kicked my All Pro Rod overboard………tried to fish it out. It is still there somewhere. The first time in two days I was in water over 3 foot fishing and I hear “bloop”…

The wind picked up a lot, so I went back to see if the spot reloaded…..should have followed Will dang it…nothing. All day long, I did not get a single bite where the day before I had piled them up early.

2:00 – I resigned myself to the fact that a limit was not in the cards…dang it….dang it….4 fish is good…right?

Ok, I know there is a stump about right….there….thump….drag was loose, grabbed the rod above the reel to hold my line tight while I adjusted the drag….grab the net…YES, YES, YES!

Did some quick math with my engineer brain – 75 inches….decent. Definitely going to keep me above 75th.

I sat as it became harder and harder to breathe – 75-25th…….then 25 to 10th…no one said my name. I was thinking the quadruple bypass from a few years ago had run out and my heart was going to stop.

My Joy was sitting next to me, trying to calm me…didn’t work.

Either I was wrong on my math, or I was still…..

They called me into the back with the top ten!

Gets fuzzy for some time to me here…..

Was awesome talking with the other guys…a lot of Barkley guys in that room!

I saw Joe Haubenreich – “is there a bathroom, I would hate to pee on myself in front of all of those folks!”

But, 7th place. Worked hard for it. Sweet!

Drove home…took a long nap. Had I even slept for the last three or four days?

Now let’s pick up the Mann’s Classic spinnerbait with the chartreuse grub; tail rigged up; always!

I had no idea the opinions on how wrong I have been all of these years about the orientation of the tail on that grub. In the past three days, I have found 1 person who agrees with me that the tail should be up.

I Googled it, searched forums ( did find some hesitant agreement ), looked images. I talked about it with all of my guys in the CAKFG, a group from WTBY and some random folks sitting behind me at the awards…….the consensus; I am wrong.

And that is ok. I have confidence in the rigging of my spinnerbaits and buzz baits. It is always the same, only the slightest of variation.

I pull out a new bait with a full skirt. If it is not white or clear w/tiny bits of red or blue; I pull it off and throw it away.

If it is the correct color, I take about half of the skirt and pull it off of the bait and throw it away.

Then I add a chartreuse grub…with the dang tail up!!!!…to the baits. If I do not see more grub than skirt, I pull a bit more off and throw it away. Sometimes leaving only 5-10 threads on the bait.

Then I will fish buzz or spinner baits parallel to cover, dropping the spinner out of sight occasionally. This will often trigger strikes. If the temp is low enough, I keep it as slow as possible; just enough to keep the blade vibrating.

Like I said earlier………..million and two ways to do anything. I am a manufacturing engineer, so I have seen how creative people can be about doing things different than designed; every now and then totally amazed! So this is just one of ‘em……….but, I personally think everyone is wrong about the grub…just saying!

Chad Hoover, Joe Haubenreich, Nik Brown, everyone else involved with the tournament – it was cool.

….all of the sponsors, NRS for the bonus bucks….

…Caney Fork Outdoors for the Hobie PA12, the Bending Branches paddle and the knowledge…and for the opportunity…

….to the CAKFG and WTBY folks for letting me learn along with you……and for making me feel a part of it all….even if you are wrong on the grub….and will always be wrong about the grub….

…and especially to my biggest fan; Joy Lynn….I warned you that encouraging me to chase this need to fish competitively was a bad idea…..but every day, you still push me to do better, to fish more….to believe in myself when I falter. You are still too good for me, but I am going to keep you!