If I were quite honest, I would say that I was disappointed with my performance in Louisiana.  And I usually am honest, even with myself when it hurts the most…and the weekend hurt.  I had dreams of driving to Shreveport and absolutely wrecking the place.  I have never felt more confident that I had a plan – spinnerbaits, top water, maybe even a crankbait or two….I was on fire!  This place would be mine…I would own it and come back with an NC title.  This was all in my wheelhouse….

Two days in, I felt like I imagined Roberto Duran did against Sugar Ray Leonard when he uttered “No Mas” during a boxing match before he walked away from the fight.  Well, actually a bit worse….more like the wrong end of a Mike Tyson fight…face down, count at 6, my corner man (lady)…..

…get up…and I breath out….eyes closed….

…I said get up….my head rolled to one side…

This daydream, a rolling ball of self pity, brought to you by the butt whooping the water put on me was interrupted by my corner reminding me that I have a nice home, a job, I never go hungry…

….And a woman who loves and supports my desire, my need, to be on the water as much as possible…

…suck it up buttercup!…

And just like that, she delivered the dose of smelling salts that brought me back to my feet (to myself).

I backed into the corner, and the fight continues.  I am out on this one, but I am still standing and I will not stop trying.

Ok, so a bit dramatic. I am still licking my wounds, rubbing my aching joints and wishing I could do it again (and I will!!!); all while appreciating that fact that my corner always has my back.  She is always there with me, for me, in spite of me; supporting, encouraging me to work hard (telling me to catch bigger fish); asking me how it’s going….answering with empathy when I say not so well.  I came back to dinner, clean clothes and a hug. 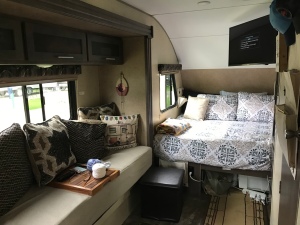 The camper was clean and organized despite my incredible desire for organized chaos to reign.  She worked as my (pit crew/corner man) to clear out a backlash that I would never have been able to manage alone with my fat fingers. 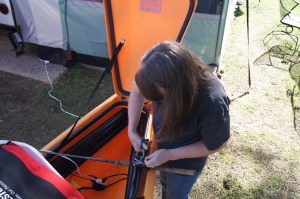 She tolerated my pouting/venting to a point that I would never tolerate from any human….and she loves me.

Like I said, I don’t get it…and it hurts to say she is right, so do not tell her I admitted that…ok? Or maybe you should, I could use the points….yeah, tell her she is awesome!

She takes care of me when I am up or down.  She rides with me to the corners of the angling world to attend virtually every event, and does so without complaint…well if I am pouting she complains about that, but that is on me….my Joy tells me it doesn’t look good on me, or for me, to be pouting publicly and that she knows that I am not going to quit fishing no matter how many times I stomp and say it!  For the record, I didn’t stomp…I am more of a whiny pouter…so…there.

But she is right.

I have no idea what karmic justice is being served that created this rut that I was stuck in (thanks Jody Queen and Brian Aliff for the lift out of it!) and I have even less of an idea what karmic justice stuck her with me!  I keep waiting for the day that she wakes up and realizes that the hand she was dealt is not a winner and moves to correct the situation.  I have told her and others that I would leave me if I could…no way someone else should deal with me.

And after the last week, when I said I am less than average as an angler…she asked me where are we going next week, not allowing me to let go of the dream.

And then, I come home to this! 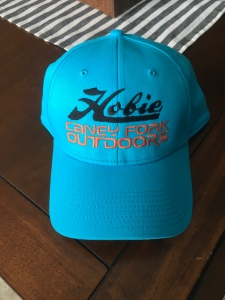 So while a week of flipping black and blue Gary Yamamoto senkos against trees was not my plan, and I took two too many days to let go of my original fight plan before ssssllllloooooowwwwwwiiiinnnnggggg down…on to the next round…….local tournament, then maybe the Harris Chain Hobie event…then…well, need to pull up the calendar, because I am no quitter….ring the bell; let me out of this corner!

Plan to create a less selfish post about the entire event as soon as I get everything put away and ready for next week.  Till later…

#titanup
Well…almost ended in last place in the CAKFG tourney Saturday! It is never good when you only get one fish accepted email on @tourneyx … but when you only catch one that is what happens. Did get a pair of @epocheyewear glasses at check in! So there was that….
Love being part of the Hobie team representing Caney Fork!
Decent day on Kentucky Lake. Take 4th any day!
Life is good. Grandkids back at our house.
Not our normal seats...but at the Titan’s playoff game!!!
Loading Comments...
%d bloggers like this: